The following is from Gush Shalom ~ the Israeli Peace Bloc. Click here or see below.

Three Israelis among captured “Estelle.”  Also on board: Members of Parliament from Sweden, Norway, Spain, and Greece.

Gush Shalom: “A stupid show of force, expanding occupation to international waters in the Mediterranean.” 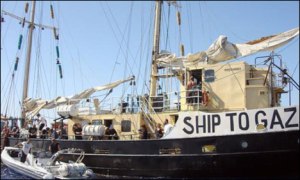 Even while the Prime Minister is considering bringing to his cabinet’s approval the report of Judge Edmond Levy, which asserts that the Palestinian territories are “not occupied,” Netanyahu and his ally and rival Ehud Barak are ordering the Naval Commandos on a stupid resort to force, demonstrating for the whole world to see that there is an occupation, and that the State of Israel is extending this occupation into international waters in the Mediterranean.

Among the passengers on the Swedish ship “Estelle,” which is now being dragged to the port of Ashdod, are three Israeli peace activists – Elik Elhanan Reut Mor and Yonathan Shapira. They arrived at a boat a few days ago, going by speedboat from Greece and dodging the Greek Coast Guard. Along with them came on board the “Estelle” five Members of Parliament, from Sweden, Norway, Spain and Greece. [Note: Also Canadian, Jim Manley, former MP -d]

In an email message sent to the Gush Shalom spokesperson Adam Keller, before Israeli Naval Commandos took over the Estelle, Shapira wrote that his decision to participate in an attempt to break the siege and bring humanitarian aid to Gaza, is a direct continuation to his taking part, back in 2003, in the “Refuser Pilot Letter.” Previous to the publication of this letter, Shapira had served in the Israeli Air Force as a helicopter pilot. Shapiro has been detained in the past when he sailed on “The Jewish Peace Ship” which was stopped off the Gaza shore in 2010.

The Estelle’s passengers got yesterday a message from the Government of Israel, passed by the Finnish Foreign Ministry, in which they were warned that if they continue on their way they would be taken into custody in Israel and that they might be prosecuted for “illegal entry into Israel.” They asked the Finns to relay back their answer – that they have no intention of or interest in trying to enter Israel, and that their sole purpose is to reach the Gaza Strip which is not part of Israel and from whose inhabitants they got an explicit invitation.