These words of the prophet Amos from the 8th century BCE ring in my ears. Our team is visiting the village of Tuqu’ on the edge of the Judean desert, 12 km south of Bethlehem. This Palestinian Muslim village preserves the name of the biblical village of Tekoa, hometown of Amos, ancient Israel’s prophet of social justice. The nearby illegal Israeli settlement of Tekoa (Teqoa’), built on land confiscated from Tuqu’, has taken the biblical name. Names aside, social justice is absent. Both justice and water are scarce commodities in this desert landscape. 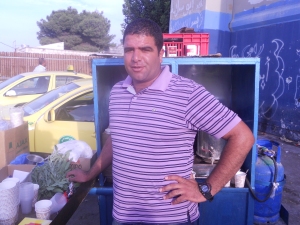 Meet Ameen, our friend and coffee/tea vendor at checkpoint 300. Every morning he greets us with a big smile and a handshake: “Hello my friends. What you like to drink?” At 3:45 AM I usually order up a strong cup of Arabic coffee ~ it doesn’t come any other way! It is especially welcome on cold mornings. Three weeks ago, Ameen invited our team to join him on a camping trip to the Judean desert ~ to a special place which lies east of his village. With excitement and anticipation, we pack an overnight bag, dress for a cold desert night, and climb into the waiting taxi/van at 5:30 PM. Driving due east, we are met with stunning views. The shadows lengthen. The pavement ends. We continue for another 45 minutes on something that vaguely resembles a road. When we reach our destination, it is dark. The moon hides behind clouds.

Mats and pillows emerge from the van: firewood, pots and pans, supplies that will become a four course meal. There is a strong east wind. The air is hot ~ a prelude to the sauna-like night to follow. The Dead Sea lies in the rift valley below the nearby cliff. The lights of Jordan twinkle on the adjacent hill. Ameen serves tea. We lounge on mats and pillows as Ameen prepares the first course ~ a chicken soup with sheep yogurt. He is an excellent cook, a skill learned in an Israeli prison. Across the next several hours, as we share food together, we learn something of Ameen’s story.

Ameen is from the village of Tuqu’. When he was a young teenager, he was arrested for throwing stones at Israeli soldiers ~ a way of resisting the theft of his family’s land which was being confiscated for the settlement of Tekoa. For this he was arrested and spent one year in an Israeli prison. As a result, he is now “blacklisted,” which means he cannot get a permit to travel or work outside of the West Bank.

As his story unfolds, we learn that when he was on a similar camping trip with the previous EAPPI team just 2 months prior, a car approached at 4:00 AM and a couple emerged with a picnic basket and a bottle of wine. Ameen welcomed them in typical Palestinian fashion: “Welcome. Come, drink tea.” As they chatted over tea, the couple told Ameen they were from Tekoa (the Israeli settlement) and had come to see the sunrise. Ameen said: “We are neighbors. I am from Tuqu’. Please join us for breakfast.”

After taking some private time together on the cliff’s edge to see the sunrise, the couple returned to the camp. The EAPPI team was now awake and drinking coffee. Ameen had laid out breakfast. The couple opened their picnic basket and added what they had brought. “We just got engaged,” they announced excitedly. “We want to celebrate with you,” Ameen replied. Congratulations made their way around the circle. Names and food were shared. Pictures were taken. As the young couple rose to leave, Ameen invited them to his home: “We are neighbors. Come visit me and my family…”

This story stays with me as I drift off to sleep on this hot desert night. As the sun rises, we explore what had been hidden by darkness the night before, and I reflect ~ These young people are, perhaps unknowingly, living on land that once belonged to Ameen’s grandfather. Yet Ameen shows no resentment. No anger. No bitterness. This was a genuine human encounter ~ In sharing food, in sharing experiences, each had begun to open their heart to the other ~ perhaps seeing in the other something of one’s own hopes and longings.

Could this perhaps be a prelude to the prophet Amos’ dream of a just world? ~ In laying down our defenses, in letting go of our hurts, in not surrendering to our fears, in taking the risk to open, can we begin to see in “the other” a reflection of the holy, a bit of ourselves? ~ It starts small, human to human. It may begin as a trickle. But if we take the risk, the trickle might become a stream and the stream a river. And we will be caught up in the flow ~ And justice will indeed flow down like water and become a mighty stream. It will become life giving water for which we all thirst in this dry desert and in the desert landscapes of our own hearts ~ We have to believe it is possible. The questions may be: Do we have the will? Do we have the courage?