Between a Rock and a Hard Place ~ A Village Surrounded 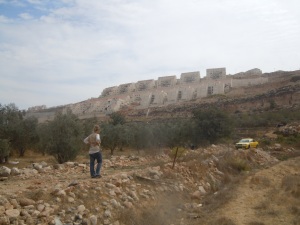 It’s only a small village ~ about 1,200 people. But it was our village ~ one of the 18 for which our Bethlehem EAPPI team was responsible. Most have never heard of Wadi Fukin (Foquin/Fuqeen) ~ a village about 8 km southwest of Bethlehem that is surrounded by illegal Israeli settlements and the dreadful separation barrier. Much of the original village land has been confiscated by Israel for settlements and for the construction of the wall. Only 6% of village land is in Area B while 94% is determined to be in Area C over which Israel has total control. (See earlier entry ~ The A, B, Cs of Occupation). When the wall is completed, the village will be isolated. Already, freedom of movement is severely restricted, impacting the economy and access to vital services including schools and health care. To reach Bethlehem, one must travel via a tunnel that passes under the major road that is for Jews only ~ it is closed to Palestinians. 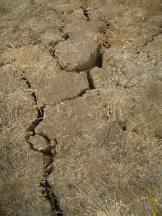 On the horizon looms the illegal settlement of Betar Illit with a growing population of over 40,000 ultra-orthodox ideological Jewish settlers ~ a settlement built on land belonging to Wadi Fukin. Settlement construction has lowered the water table in the village, which has 11 natural springs. Raw sewage from the settlement is regularly released into the valley, contaminating the small plots of agricultural land. The villagers are also subject to settler violence including bathing in the springs, burning of wheat fields and uprooting of olive trees. To add insult to injury, the extremely high unemployment rate forces some to seek jobs in the settlement, working for those who have stolen their land and their livelihood. For these settlers, it is seen as cheap labor.

November is the olive harvest in Palestine. Villagers from Wadi Fukin routinely request protective presence from internationals and Israeli peace activists during this time as this has been shown to reduce settler violence. So it was that our EAPPI team joined with several vanloads of volunteers to help pick olives. The day was beautiful ~ bright sun and a light breeze. When we arrived, the villagers were already gathered in small groups under their trees with tarps spread wide to catch the ripe olives. It is a family affair. Community picnics are held in the shade of the olive trees. The harvest goes on for days or weeks, depending on the number of trees and how much volunteer help villagers receive. We were given the typical Palestinian welcome, as we piled out of the vans and fanned out to different areas of this beautiful valley.

Up a Tree in Wadi Fukin
Photo Credit: Adele

Now olive picking is a tedious job! Olives are small and there are lots of them! Tarps are spread wide below the trees. Buckets, ladders, special olive “rakes,” and burlap bags are part of the equipment needed. All of this plus keen eyesight to help you find each and every olive hidden behind clumps of leaves. We were invited to climb some of the larger trees ~ something I hadn’t done since I was a child. I loved it! A beautiful day working on the land…

But the realities of life in this small village encroached on my thoughts that day. As I worked I reflected. What must it be like to require protective presence just to be able to harvest your crop? Looking up at the red roofs of the settlement towering above us, like a storm cloud blocking the sun, I thought about what it would mean to live in the shadow of those who have stolen your land and your livelihood. I wondered what it was like for those settlers who have built their lives on the ruins of other lives. Did they know? Did they care? What was it like for the children and young people of Wadi Fukin? Did they dream? Did they hope for a better tomorrow? 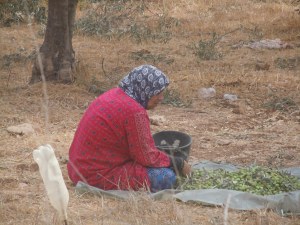 And the question comes, as it always does ~ “What can we do?” ~ As I was completing this blog, I opened an email from the U.S. Campaign to End the Israeli Occupation. It was an update on a recent request by Friends of Wadi Fukin to the Lantos Human Rights Commission that action be taken to investigate human rights abuses in Wadi Fukin. The Commission has now responded with an official inquiry to Secretary of State John Kerry! To take action in support of this inquiry, please consider signing the open letter here. For more information see Friends of Wadi Fukin and a YouTube video on the village.

Campaign to Save a Small Village
Photo Credit: Public Domain