A Tragedy ~ Five Families and the Disputed Oven

Much has transpired in Palestine and Israel since my last post. During the first weeks of the assault on Gaza, I was “unplugged.” When I returned home, I was without words. What does one say? How does one respond to such an assault ~ a massacre of such proportions? ~ But the events of this summer and those of recent weeks have put into stark relief the reality that we must work tirelessly to end the brutal Israeli occupation of Palestine and the inhumane blockade of Gaza ~ And so once again I am compelled to put pen to paper…

You may remember the two blogs I posted last year at this time: “The Oven Goes to Court: The Oven vs. the District Civil Administration, Ministry of Defense, State of Israel,” and a follow-up posting 3 weeks later: “Oven Wins in Court ~ But Battle Is Not Over.” 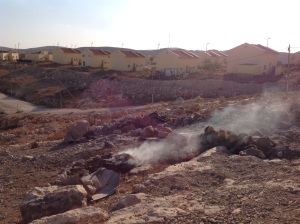 On October 27, the oven lost ~ but it was not just the community oven that was lost on this fateful day ~ Five Palestinian families lost their homes and Israel lost its humanity ~ The bulldozers came and went, leaving in their wake piles of rubble, sobbing women, and frightened children ~ What will they do? Where will they live? ~ Winter is also coming, bringing rain, cold, and icy winds. And one of the many homeless is baby Mohammed, not more than a few months old ~ My heart breaks for our friends in Um al Kher village in South Hebron Hills.

I urge you to read two painful but powerful blogs, “This Hurts,” and “After the Demolition.” They are written by my friend and colleague, Jan, who was in the village this week, reaching out in compassion and seeking to provide some solace and a human face to our friends there. As Jan so rightly states: “I do know, beyond any shadow of any doubt, that demolishing Iman, Balil, and baby Mohammed’s home will not further the security of the state of Israel in any possible way. This is an absolute act of willful cruelty.” Jan challenges us as Canadians to pressure our government to represent the values of the Canadian people on the world stage and hold nation states [here, Israel] accountable for their actions that so blatantly contravene international law ~ not to mention basic human decency!

So much more than the oven was lost on this fateful day ~ How can we remain silent? ~ Are we willing to do our part? ~ Together we can effect change!

4 Responses to A Tragedy ~ Five Families and the Disputed Oven