“The 2 state solution is dead, and Israel killed it,” says Jeff Halper, co-founder and director of the Israeli Committee against House Demolitions (ICAHD). Jeff is currently on a 3 week cross Canada tour and will speak at 2 public events this weekend in Edmonton ~ Friday at the University of Alberta (ECHA, Room 1-182), 7 PM and Saturday at Southminster-Steinhauer United Church, also at 7 PM. (Click here for details and maps.) 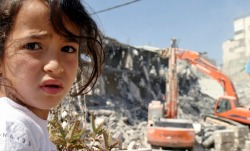 Fear in the Eyes of a Child

Jeff is an Israeli anthropoligist and a committed activist who passionately and actively resists the Israeli occupation of Palestine and the demolition of Palestinian homes ~ 48,000 homes since 1967! He has been a long voice in the struggle for Palestinian human rights and a just peace in the region. Jeff participated in the first (and successful) attempt of the Free Gaza Movement to break the Israeli siege by sailing into Gaza. He was nominated for the 2006 Nobel Peace Prize together with Palestinian intellectual and activist Ghassan Andoni.

Jeff is the author of Obstacles to Peace: Re-framing the Israeli-Palestinian Conflict, and more recently An Israeli in Palestine: Resisting Dispossessionm Redeeming Israel (2008). His forthcoming book is entitled War Amongst the People: Israel, the Palestinians and Global Pacification (2015).

This national tour is sponsored by the United Church of Canada, Anglican Church of Canada, Canadian Friends Service Committee, Canadian Friends of Sabeel, and the United Jewish People’s Order. Organizers include United Network for a Just Peace in Palestine and Israel (UNJPPI) and Independent Jewish Voices (IJV). Locally in Edmonton we are joined by Palestine Solidarity Network and Mennonite Central Committee of Alberta. 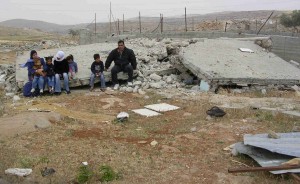 In the Wake of the Bulldozers

Jeff’s tour in the east has been very well received. To hear a radio  interview from Toronto, click here ~ and here to read an article in our local St. Albert Gazette. To view his tour schedule, click here. If you are in Edmonton, Winnipeg, Vancouver or Vancouver Island, you still have a chance to hear this powerful voice for peace! I am grateful for Jeff’s strong and courageous witness!